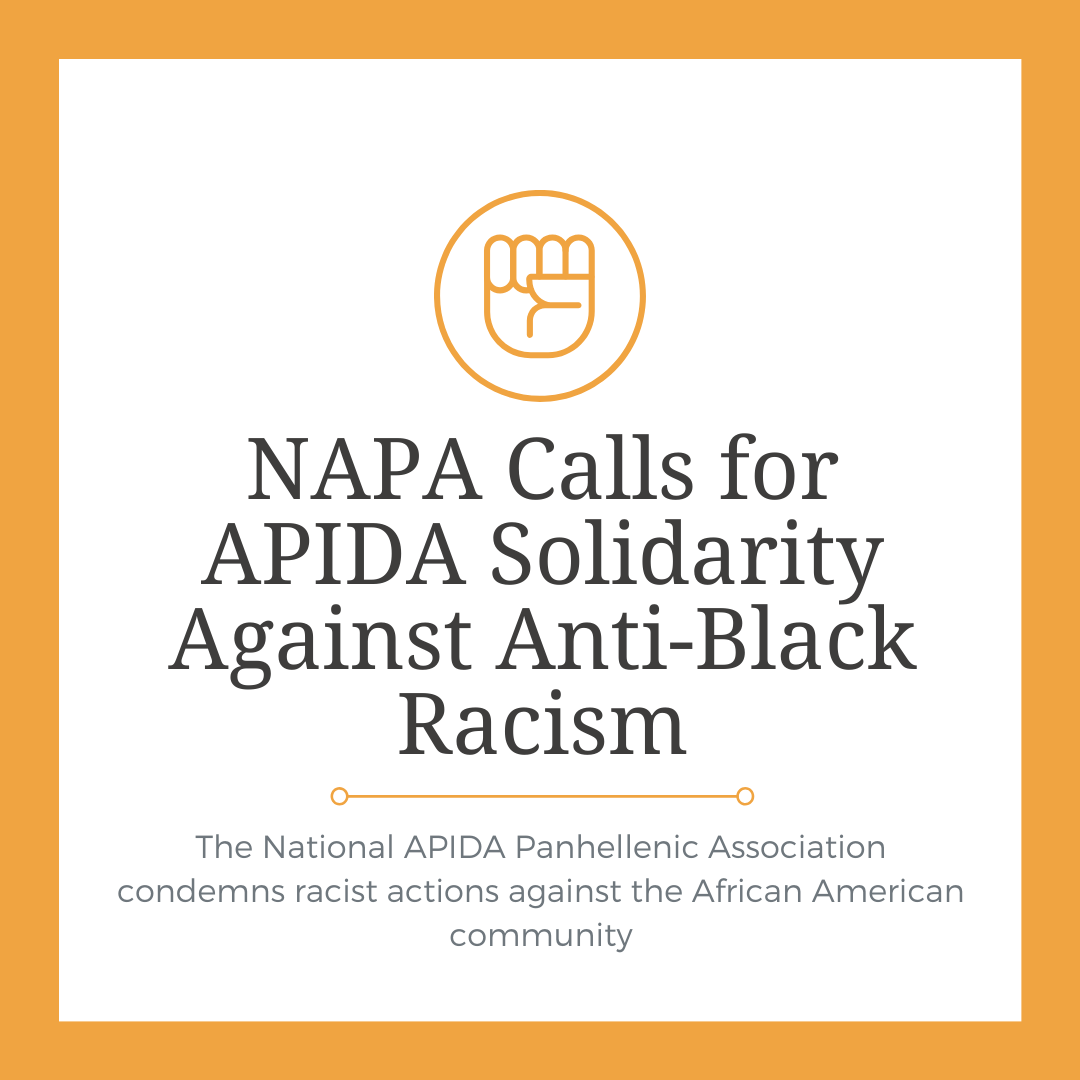 Fraternal organizations were created to challenge the status quo and advocate for change. While much has changed since the beginning of fraternal movement, unfortunately, racism in America remains consistent. It is imperative that fraternal organizations, including the National Asian Pacific Islander Desi American Panhellenic Association (NAPA), stand in solidarity and mobilize to speak out against Anti-Black racism. On Monday, May 25, 2020, there were two very public examples of racist incidents against the Black community.

In New York City, Amy Cooper called the police in an attempt to villainize Christian Cooper (no relation to Amy Cooper), an African American man, who simply asked her to follow the rules of Central Park. She threatened him after he began recording the interaction, stating, “I’m going to tell [the police] there’s an African American man threatening my life,” and repeating “African American” several times after dialing the police. Thankfully, Christian Cooper is still here today to share his story, but this example speaks to a larger narrative in which Amy Cooper believed that by calling the police, she would rid herself of accountability for her actions. It demonstrates Amy Cooper was conscious of her sense of entitlement, and even if she did not intend to physically hurt him, she knew she had the power to do so.

In Minneapolis, four police officers were involved in the death of George Floyd, a 46-year old African American man, after being handcuffed and pinned to the ground, with one officer (Derek Chauvin) kneeling on Floyd’s neck. The Mayor of Minneapolis stated, “There is no need to apply that kind of pressure, with a knee to someone’s neck.” During this incident, another officer (Tou Thao) walks complicitly, preventing witnesses from getting involved.

Examples like those provided above have impacted the Black / African American community for years. It is imperative that APIDA-identifying individuals not remain complicit or be passive bystanders when seeing racist actions or policies. As a collective community, we must fight for and demand justice, and we cannot become complicit bystanders when African American lives are taken. The National Council of Asian Pacific Americans (NCAPA) stated, “We cannot ask the Black community to fight anti-Asian racism if we are not willing to fight for them.”

NAPA organizations were founded upon the history of discrimination against the APIDA community. However, we acknowledge that our member organizations are diverse and have members that identify as Black. This statement calls on the values and pillars of each of our member organizations as well as the commitment to advance unity by having our non-Black community actively stand in solidarity for the lives and safety of our Black brothers and sisters.

NAPA encourages and empowers APIDA-identifying individuals to combat anti-racism, especially anti-Black racism and anti-Blackness. Potential actions and changes to accomplish this include, but are not limited to:

This list is not exhaustive. NAPA remains committed to educating our communities, and will compile a detailed resource guide to be shared at a later time.

The APIDA community must support the African American community. Without solidarity, no progress can be made.