The National APIDA Panhellenic Association celebrates the accomplishments of the LGBTQIA+ community and stands in solidarity with our LGBTQIA+ members. 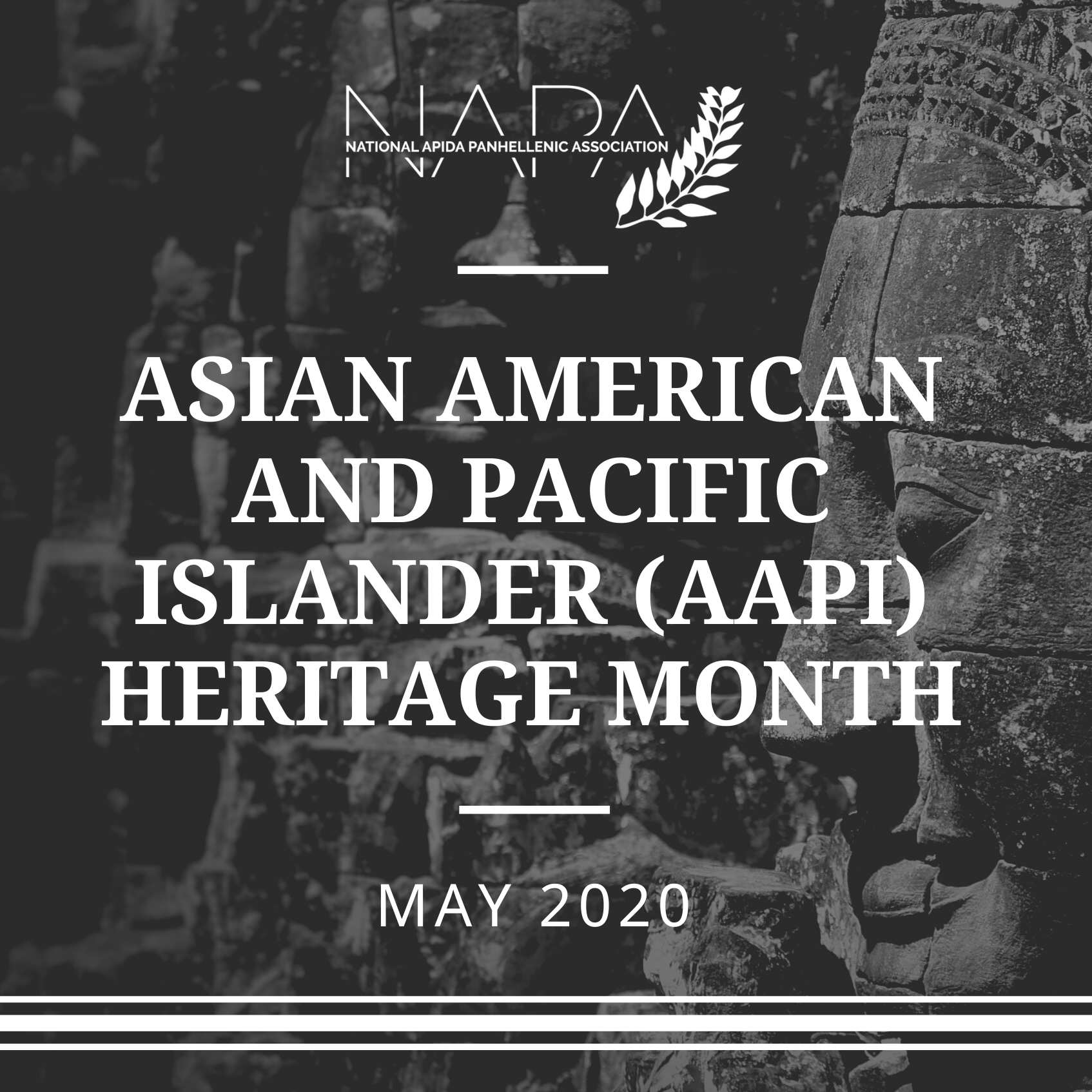 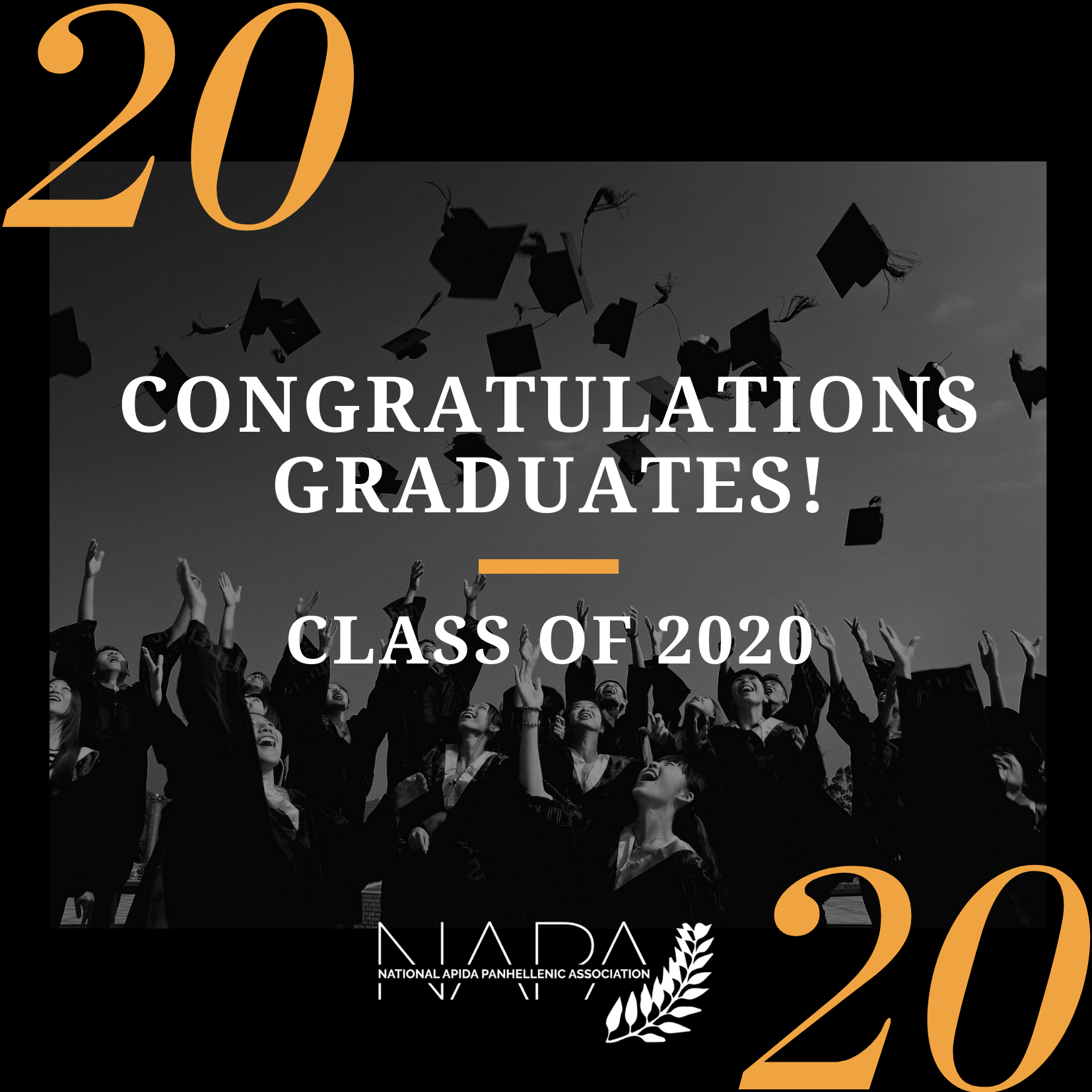 Congratulations to all our graduating NAPA members this year! 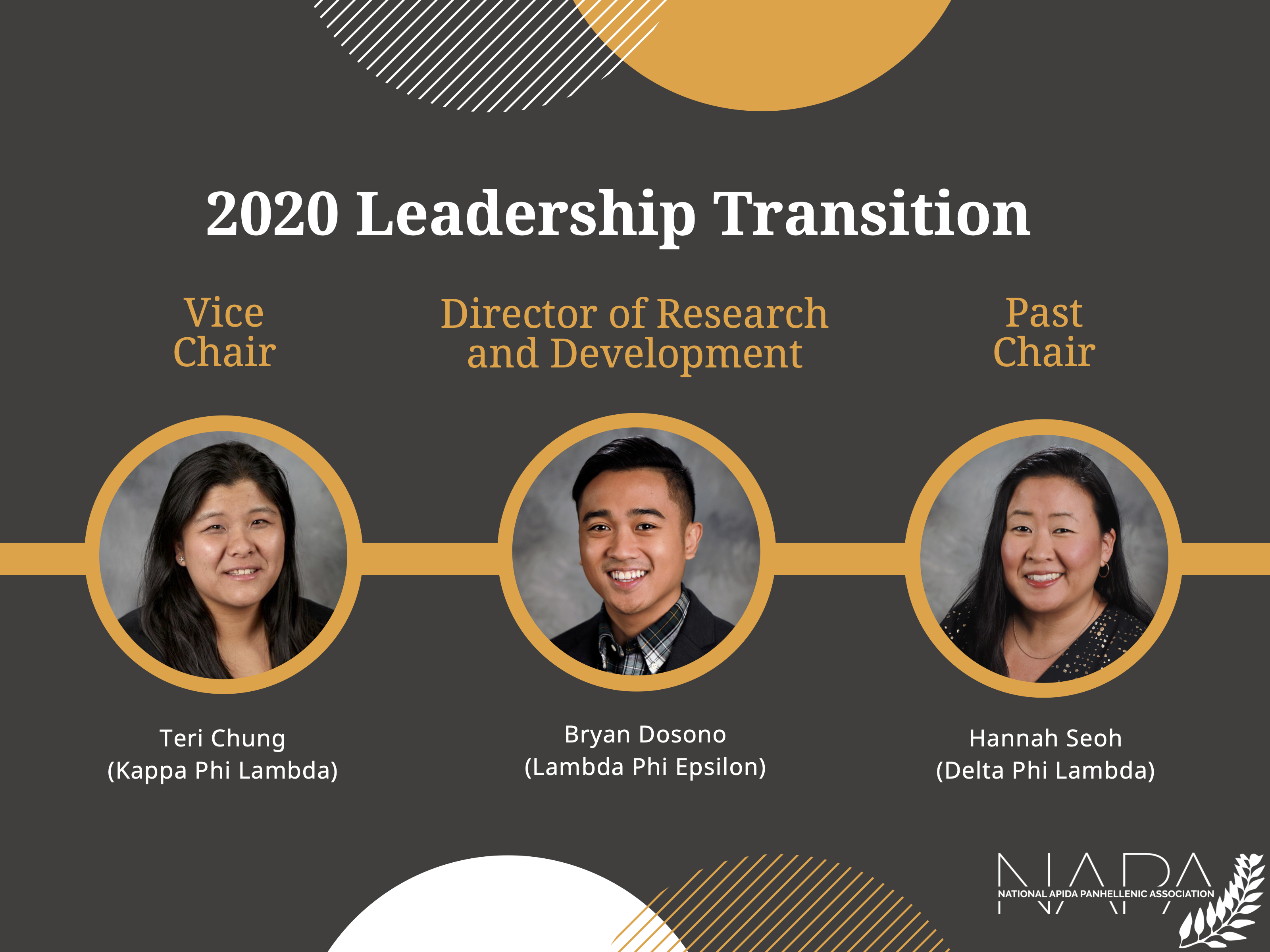 Three members of the Board are transitioning to serve NAPA in different capacities. These volunteers collectively contribute over two decades of volunteer experience on the NAPA Board to advancing the fraternal movement. Teri Chung is appointed to the role of Vice Chair and is charged with setting the strategic direction of the NAPA Executive Board. Chung previously served as NAPA Secretary since 2016 where she worked with volunteers to update policies and procedures of the association. “I am incredibly honored to return to the NAPA Board to continue to refine the gold standard for our member organizations,” says Chung. “I aim to develop a strong foundation of resources based upon NAPA’s needs from strategic planning while still reflecting and preserving the association’s purpose and history.” Bryan Dosono is appointed to the role of Director of Research and Development and will publish annual trends in membership data to shape the discourse on advising collegiate APIDA students. Dosono previously served as Director of Membership since 2017 where he created the Standards of Excellence Recognition Program, and Director of Technology in 2016. “We’ve been on a productive publishing spree over the past year in providing resource guides for university advisors, written perspectives for practitioners, and open data sets for HQ partners to make informed decisions,” says Dosono. “We’re eager to take on more opportunities to share the untold stories of our community, and I’m thrilled to elevate the significance and rigor of research for our association.” Hannah Seoh transitions into the role of Past Chair and will shape long-term projects that advance the goals of the association. Seoh previously has served as Chair since 2016, Director of Interfraternal Relations in 2015, and Secretary in 2010. “I feel honored and blessed to be able to continue in service to NAPA, especially in such uncertain times,” says Seoh. “I have no doubt that this Board will continue to push NAPA to new heights and I’m excited to be able to witness that first hand.” ### About NAPA NAPA organizations set the gold standard for Asian Pacific Islander Desi American (APIDA) fraternities and sororities. In addition to meeting the association’s base standards, NAPA member organizations are exposed to resources and expertise to help them continually improve and be the best they can be. Universities, Greek Councils, and students want the best APIDA fraternities and sororities on campus and they can find them in NAPA. Contact Bilal Badruddin, Chair National APIDA Panhellenic Association chair@napa-online.org

Victoria L. Chan is the daughter to Chinese immigrant parents. Originally based in New York City, she graduated with a double major in Political Science and African American Studies from Syracuse University. Victoria is a proud sister of Kappa Phi Lambda Sorority, Inc. Victoria speaks about some of her experiences as a member of an Asian Interest Sorority, “Committing myself to an Asian interest sorority meant making a lifetime decision to empower young women and uplift my community. We are constantly being scrutinized and stereotyped by Asian women, which is why it is important to work hard to break barriers. College is a scary place, so finding a family and a place to call home is very important. One of the most important aspects about being a leader in Greek lettered organizations is the concept of Greek unity. College is a time to explore different opportunities and experiences. My chapter collaborated with Phi Beta Sigma Fraternity, Inc. at Syracuse on lots of events and both organizations won fraternity and sorority of the year together! We must step outside of our comfort zones and intentionally learn about others in order for us to grow as people.” Victoria has worked as Jackie Chan’s executive assistant and has traveled from Mongolia to Miami, from Singapore to Spain, assisting in earthquake and drought relief efforts to being on the international promotional tour of “The Karate Kid” remake. She has been involved with non-profit performing arts programs since 2000. She has worked with the Britney Spears Foundation, American Idol, the Jonas Brothers Foundation, RUN4LIFE, 50 Cent’s G-Unity Foundation, Jackie Chan’s Charitable Foundation & Usher’s new Look Foundation. In 2011, she launched “elicit 4tography”, dedicated to helping non-profit organizations. She has been featured in the Hollywood Reporter, MTV, People Magazine, Daily News, VH1, and Empire Magazine. She was most recently mentioned in PeoplePets.com for the Jackie Chan Charity Bear Project, which she launched to benefit the JC Build a School Foundation. Victoria currently works as the Graduate Assistant of Greek Life at the University of West Georgia. She enjoys writing poetry and practicing yoga in her free time.

Clair Kuriakose, Distinguished Sister Euphoria of Sigma Sigma Rho Sorority, Incorporated. founded Shingari’s School of Rhythm on 2008 after she graduated form Saint John’s University.  Clair was captain of the SJU Bollywood dance team, Raaz and wanted to continue her passion in Indian Bollywood dance after her studies.  After she moved back to Texas, she started she started Shigari’s School of Rhythm in hopes to share her passion for dance for the younger generation. The school now has many locations nationwide including Houston, Dallas, Chicago, San Francisco and Los Angeles! In 2013 Clair started a new online branch to the school in hopes to spread Bollywood dance worldwide.  The online branch, www.bollywoodtrainer.com has now over 1000 users world wide. Shingari’s school of rhythm in association with bollywoodtrainer.com has won many awards for choreography and performance.  They have also had many opportunities to perform at live concerts including Jay Sean, Sonu Nigam, and AR Rahamnan. Recently Bollywoodtrainer.com has opened for the NBA prime time  game Dallas Mavericks vs Chicagobulls! Bollywoodtrainer.com wishes to continue to spread the Indian culture in 2014.

Jeanette Moy, a member of Sigma Psi Zeta Sorority, Inc. currently serves as the Chief Strategy Officer and Vice President for Strategic Planning for the Brooklyn Public Library. Jeanette executes the Brooklyn Public Library’s plan to reorganize the nation’s fifth largest public library to fit more comprehensively into our increasingly digital society. It is by no means an easy feat.  However, Jeanette seems to effortlessly balance the responsibilities of her job, her children, and commitment to improving Greek, community, and nonprofit organizations that enrich culture of various communities.  In addition to her endeavors at the Brooklyn Public Library, Jeanette played a key role in utilizing digital tools to provide the citizens of New York City better access to information and services across agencies as a senior policy advisor in Mayor Michael Bloomberg’s office of operations. Inspirational from the onset of her career as a community builder, in 2004, Jeanette helped lead the campaign between twelve multicultural Greek organizations to engage the Asian Pacific Islander American (APIA) youth to vote.  After successfully registering 8,000 people to participate in the 2004 electoral process, as well as raising money for the Asian Tsunami campaign, the group was the beginning of what eventually became the National Asian Pacific Islander American Panhellenic Association (NAPA). Graduate of the University of Rochester, member of Sigma Psi Zeta Sorority, Inc., a founding member of NAPA, a founding board member of APIAVote, and former Organization of Chinese Americans (OCA) college leadership trainer, Jeanette Moy is truly a driven leader who has made and continues to make a tremendous difference in the world around her.

Evan Jackson Leong is having a great year. He’s been walking the red carpet at film festivals across the world to introduce his film Linsanity!, which opens across the US on October 4th. When screened at the Sundance Film Festival, Linsanity! earned the director a standing ovation. About that reaction, Evan said, “It’s incredible. This is the biggest stage and it was amazing. I’ll never forget it.”. In many ways, Evan Leong’s story mirrors Jeremy Lin’s. Both of them appear to have come from nowhere to experience great success, but nothing could be further from the truth. For both, their success is the result of years of hard work and tenacity. He didn’t attend film school nor did he serve an internship at a big studio. He started his collegiate studies at UC Riverside, where he joined Pi Alpha Phi fraternity before  transferring  to UCLA to earn his degree in Asian American Studies. He immersed himself into the Asian American independent film scene and received his first big break in 2003 with his film BLT: Genesis, a behind-the-scenes look at the seminal film that changed the direction of Asian American cinema. Both Lin and Leong had to fight the stereotypes that Asian Americans are scholars, not athletes or filmmakers. Both had to break society’s preconceived notions to follow their dreams. “Asian-Americans don’t really have role models of that kind we can look up to,” says Leong. “Jeremy did it in the biggest way possible. It’s not just a story about basketball, it transcends sports and culture; you can follow your dreams and actually achieve. For Asian-Americans, that’s a huge thing.” To find a screening of Linsanity near you, check here.

Nina Polvanich Louie crossed at the Zeta Chapter, Stanford University, of alpha Kappa Delta Phi Sorority as part of the Zeta Class in Fall 1999.  After graduating, she spent a few years of consulting at McKinsey & Company in Thailand.  She returned to the United States to complete her graduate studies at Harvard University, where she met Mike, the love of her life!  After a few years, they ended up on the West Coast, married and with an adorable son, Donovan. Around Donovan’s second birthday in September 2012, Nina felt something was not right with herself.  She received life changing news – at 32 years old, she was diagnosed with Stage IV lymphoma, an aggressive blood cancer.  Throughout her fight, Nina has been an inspiration to all of us, staying strong, battling this disease, being a role model for her son, and also bringing light to the major gap in Asian American registrants in the bone marrow registry.  A bone marrow donation is one of the most viable methods of battling lymphoma and a match is more likely to be found in someone of the same ethnicity. The Save Nina campaign launched in May 2013 order to help Nina and others battling diseases come closer to finding a match for a bone marrow transplant. Since she is of Chinese/Thai descent, she was informed that her chances of finding a match in the bone marrow registry is 1 in 20,000.  Save Nina has gone viral internationally with hundreds of drives hosted by friends and sisters, which have typed thousands of people across the country. Celebrities like Boyz II Men, Hello Kitty, Jamie Chung, Chef Morimoto, Sonia Kapadia, Kristen Bell, Jenna Ushkowitz, Sheryl Sandberg and more have helped spread the word through social media. Many Asian associations and corporate companies have hosted typing drives at their local events and within their headquarters.  Throughout it all, Nina remains gracious and strong.